The characters and enemies in the game are all cool sprites that, besides invoking the feeling of great 90s gaming, also look cool.  The backgrounds are in 3D, but they blend together really well.  The sprites are simpler on the map, and become much better during battles.  The music is also really catchy and fits the game.  I really dig how the game looks and sounds.

Before any battle starts, you can scratch your stickers and get some nice effects for that battle.  These vary wildly, from a specific stat buff, to an enemy debuff, to more money, or even ones that don't seem to do anything.  Even though you are doing it every time, I tended to forget that I had to scratch when a battle started.  Each sticker has a different rarity and scratch difficulty, so there is some tactical thought you can put into your choices.  It's a fun thing to make battles more unique.  However, it's only one of several things that will wear our your hand...or controller...while playing. 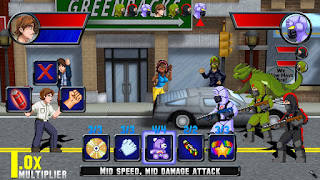 Battles are turn based.  The current order is shown at the top of the screen and it is determined by your speed stat and the speed of what you are doing.  There is a normal attack, that has a sliding bar mini-game to give critical damage.  However, this attack is rarely used for damage as it restores MP.  MP isn't used for abilities, like just about every other RPG, but for the unique charge mechanic in the game.

There are three charge abilities to increase the damage multiplier on your next attack.  There is a quick one that will take some MP to add an amount of charge of around 2x.  The second is a timing mini-game where you try to stop the meter closer to the end as it speeds up.  The third is mashing the button to gain the bonus.  The third was easily the most powerful, but it really wears out your arm (and maybe the controller).  The second didn't seem much more powerful than the first, so I rarely used it.  For longer play sessions, I stuck with the quick charge, mostly to save my poor mashing muscles.  A turbo controller would absolutely be a great option to use, though.

You can also get some MP and extra charge multipliers from guarding attacks.  If you press the button when an attack is going to hit you, you can reduce its damage.  Early on the difference is negligible, but it becomes more significant later on, especially in boss and mid-boss fights.  Thankfully it isn't too hard to at least get some damage reduction, but the timing for the best guard is tricky for some attacks.  The only small issue I had with the guarding is a few attacks (notably the flamethrower) would cover up my character and block rating so I couldn't tell how close I was, since the text isn't readable through some effects.

Your special attacks are the items that you equip.  Each one has a set number of uses per battle.  Some require no additional imputs, but many require either mashing the button or a timing mini-game of some sort.  It's pretty cool and there are a lot of great references in the numerous equips you can find.  The only problem is the use count.  For most fights it is fine, but any lengthy ones it can be very easy to run out.  If you do, you are stuck with the weak normal attack and trying to get enough MP to charge it to do something resembling decent damage.  This also makes the Endless fights really hard as you press through them.

Plus, attacks seem to miss more than I would think they should.  Even with extra accuracy and a weapon skill that has high accuracy, I've missed too much.  With limited uses, this really is a bummer.  Even more so if you sank some MP to charge it, which is then also wasted.  I'm not sure what the hard numbers are on accuracy, but I felt like I missed too many attacks.  Granted, I'm a huge accuracy nut in RPGs, so anything more than a rare miss bothers me. 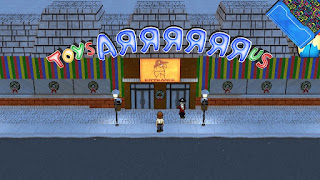 Another great reference to 80s/90s kids is the menu.  Your menu is one of those old trapper keeper folders.  The front shows the battle stickers that you are currently using.  These can be replaced anytime you aren't in battle.  The cover of the folder also can grant stat bonuses to help in battle.  Inside you set your abilities and can check your quests.  Just about everything in the game is a nod to something, and I think it works really well.

Right now the game has five episodes.  You can do them in any order, especially if you use the settings to scale the enemies.  However, the game makes the most sense if you go in the proper order.  It took me almost 10 hours to go through all of them.  Since many of the quests have alternate solutions, there is a good reason to replay the chapters if you so choose.  Plus, you keep your stats and items, so it is also an excuse to get them all.  The episodic format also works really well for Saturday Morning RPG.  It feels more legit, like an old cartoon show (that is the point), plus gives easy ways to add more to the game.

If you like RPGs, you should try Saturday Morning RPG.  If you are in your late 20s or older and like RPGs, you should absolutely get this game.  It's not perfect, but it is very fun and should give you a great nostalgia kick.  I "marked out" several times in the game.  Even if it is short, the playtime seems perfect for the cost.  I really enjoyed the game and would recommend it, just be careful not to wear out your controller or yourself.
Posted by The SAHD Gamer at 8:32:00 PM