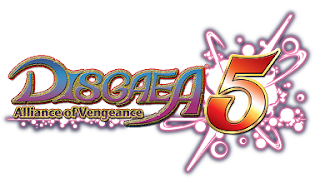 It should be well known by now that I really enjoy the Disgaea series.  I've liked every entry in the series so far, so I was of course eager to get an early review code for Disgaea 5.

For the uninitiated, the Disgaea games are a series of strategy RPGs (SRPGs for short).  You move and attack on a grid and alternate turns between you and the enemy.  Stats and levels go crazy high, and the plots revolve around demons and the Netherworld.  Every item and piece of equipment has a random dungeon inside of it.  There are lots of character types to use in battle, and a lot of other things that set it apart from other SRPGs that are around.

Does the game still hold up to the Disgaea standard for gameplay?  Yes, it does.  Is the plot something that fits in the universe?  Yes.  There is a very powerful Overlord trying to take over all the other Netherworlds, and your small group is going to stop them.  Are the characters decent?  I'd say yes.  Most of them have extra things about them that aren't readily apparent, and their conversations tend to be humorous.  It's no horse weiner, but there are some funny parts.  Particularly, I like Red Magnus as the wrestler/Hercule (from Dragonball Z) role.  At first, Seraphina annoyed me, but she got less so as the game went on.  None of the characters are particularly groundbreaking, but done well enough.

So now that we got the basics out of the way, what about the changes?  Given the subtitle of the game, I'll start with the Revenge meter.  Now all characters get a new meter next to their portrait.  As they or their allies take damage, or they dish it out, the meter will fill.  When full, a unit enters Revenge Mode, where all of their skills cost 1 SP and they only do critical hits.  If the unit is an Overlord, they also get a powerful Overload skill (which I keep reading as Overlord skill).  These skills don't take your turn to use, which is a big deal in a game like this.  I don't have to tell you how great it is to be able to use any skill for a negligible cost.  However, the effect only lasts 2 turns, so make use of it while you have it, or stay clear of a powerful opponent who is out for revenge!

Most of the other changes are small, but I like most of them.  Each stage has a one time bonus that you get for maxing out the bonus gauge.  While it isn't a huge thing, it's nice.  The character world is now presented like a board game, where you make your way around a board and try to land on spaces that give you things, like mana, HL or stat increases.  If you run out of moves, you will halve any bonuses you receive.  If you make it to the end, you pick a bonus (better aptitude, more counters, etc.) and any subsequent runs will cost a lot more mana.  This cost resets if you reincarnate, which is nice.  The character world feels a lot different and easier to use, and I approve.

Groups return, and allow you to put your characters in various groups that have different effects.  One might give bonus experience or mana relative to how much the leader earns, or let you capture enemies.  These groups can be leveled up by sacrificing prisoners that you have captured or have surrendered.  Prisoners can be interrogated, which lowers a meter.  When the meter is out, they can be made allies, roam around the pocket Netherworld, or give bonus experience when sacrificed to level up a group.  Since there are a lot of Netherworlds, you can also send some of your extra characters to explore them and bring back prisoners, items and gain experience.  I really like that there are good uses for the extra people you acquire in the game, and a reason to have them get levels and have some gear on.

The item world stages are small and don't have many enemies, which is good.  This has been the case for the last game or two, but it seems faster to go through them in this game.  The biggest change is that you have to actually finish the level to get a level for the item, as it is now a bonus gauge reward.  The boss floor even has an extra level gain at the top of the bonus list.  There are a few other ways to gain bonus levels for an item, which is cool.  Innocents can now be moved off of items without being subdued.  Yay!  Now they have to be subdued to combine them.  What?  It's not a huge deal, but it is strange.  If I have to pick one, I'd rather move them without subduing then combine without subduing.  I'm not sure why we can't have both.  Subduing them still increases their value, which is still a reward for going into the item world and defeating them.  Either way, I'll take this change.

Probably my favorite change is to character creation.  While it used to cost mana to create, it now takes money (HL).  For me, money is a much easier resource to gain in the Disgaea games, so this change is huge to me.  Plus, you can also spend some extra money to increase the newly created character's level closer to your highest level character.  This makes it so much easier to have a new person actual contribute instead of being regulated to the B Team.  Characters can also now equip a secondary weapon, and switch during combat for different situations.  I love these changes.

Is there anything I don't like in the game?  Sure!  When you are in the pocket Netherworld that serves as your base, a song plays.  There are some vocals to the song, and it gets annoying pretty quickly.  It feels like the whole song is a thirty second snippet that is endlessly repeated.  You spend just enough time in the Netherworld that I was hoping for a way to turn off just the song that plays.  Other than that, my only annoyance were the battles that are clearly skewed against you.  They didn't feel as bad as the ones in Disgaea 4 at least, but there are a few.  Grinding fixes this, but it's not an ideal solution to balance.

With all of the things to do in the game, it can eat up a lot of time.  Going through only the story is almost impossible, since there are a lot of other things to distract you.  Entering the Item World to level up equipment, using the Character World to make someone even better, or even end game challenges that require mind-boggling stats to overcome.  Disgaea games do require some grinding, and Disgaea 5 is no exception.  It didn't feel necessary very often, or for very long, but that could be because I tend to use the Cheat Shop to increase the experience percent I get to minimize grinding.  Even so, it is easy to lose over a hundred hours and have fun doing so.

Disgaea 5 is really fun to play.  The core SRPG aspects of the game are still intact and working great, and my gripes with the game were small.  The many new additions and changes make this one of the best Disgaea games yet, and a must play for any strategy RPG fans.
Posted by The SAHD Gamer at 1:29:00 PM