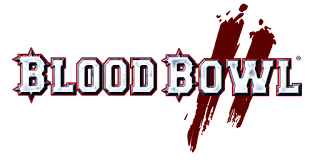 Back in high school, a friend and I played Warhammer 40k, and then eventually Blood Bowl.  He liked it much more than I did, mostly because I won one out of our 5 games.  I had a solid team, but had lots of difficulties getting past his mummies and vampire.  Still, I was looking forward to trying out the video game of Blood Bowl 2, because maybe this time will be different.

If you have never heard of or played Blood Bowl, it is a tabletop dice-based strategy game... about football.  American football, to be specific, and if you care about such things.  Anyway, during your turn you can move your units based off their movement allowance, hit an enemy that started next to you, blitz (attack from a distance once per turn), pass or foul an opponent on the ground (once per turn).  When moving, you can "go for it" and try to move and extra square or two, but each has a chance to fail.  If you fail, you fall down.  Just about everything in the game has a similar chance to work.  Want to pas the ball?  There's a chance to fail.  What to pick up the ball?  Yup, you guessed it.

It does make sense for a tabletop game, but it sometimes comes across as weird.  I mean, most units have no greater than a 50% chance to pick up the ball?!  It just sounds crazy.  You need to be careful what moves you do and what chance you have of succeeding.  You can buy rerolls for your team to help out, though.  If you are moving in any square next to an opposing unit, then you must make a dodge roll.  These rolls are shown at the bottom of the screen, but the game doesn't really go out of its way to point them out.  This is much more streamlined than the physical Blood Bowl.  There are also special die when you attack another player, with several results.  You can knock them down, be knocked down, both be knocked down, or push them.  When knocked down, there is a chance you will be stunned (down for an extra turn), knocked out (out of the game with a chance to come back on each kick-off) or even killed.  You can probably guess what that does.

Now, I'm not going to say the computer cheats in its matches, but I will heavily imply it.  There seem to be many instances of them having much better luck with dice rolls overall.  Whereas I seem to get more push results than knockdowns, they can easily flatten my team.  There have be too many instances of them winning on a red die roll.  Red is for when you are outperformed, and the target gets to choose the result.  Yes, there is a chance that both would be bad for the person with the advantage, but the AI gets it more often that it should.  It's likely a rubberband mechanic, but the computer tending to get better rolls is always a pet peeve of mine.

Each match consists of two halves with 8 turns each side.  So, each player gets 16 turns with a reset in the middle.  These matches can easily take over an hour.  Campaign mode matches are longer, simply because they don't have a time limit on turns and the turn doesn't end when you have a bad roll and fumble the ball or fall down.  League matches, online and single-player, have a time limit for each players turn, and a failed roll will end your turn.  This makes matches take less time, but not by much.  Sometimes AI opponents will take a minute or so to decide how to even start their turn.

Campaign mode follows a story as you play the newest coach of the Reikland Reavers, the lowest team in the league.  There are several matches, and for the first few, it will add a few rules each time.  While it's not a great tutorial, it is pretty effective at easing you into all the various rules of Blood Bowl, and is pretty fun to play.  Between each section the announcers will go over some story, and even poke fun at the fact there even is a story.

The other main mode is League.  If you do single-player, there are several options of leagues to choose from, each with different rules for who fights who and how to get eliminated.  There are some good options in there.  Online is pretty similar, but more complicated.  You have to apply for a league and then be approved.  There are tickets given out to actually compete in a match.  While it is nice to be able to coordinate matches with people from different areas, it is really more complicated than it should be for friends to do it.  Yes, there are Friendly matches, but the progression your team has during league play is nice, so it would be nice if it weren't so complicated to set them up and do them.

Team creation is pretty much what you would expect.  You make your team by picking one of the races and then buying players.  Each new team is given a set amount that allows you to buy enough players to actually play.  If you have some left over, or get more, you can buy replacements or team abilities to help out, such as rerolls.  You can name the team and pick the icon to represent them.  You even choose your sponsor and home stadium.

Probably my favorite part of the game is the announcers.  Since they don't directly call every action, it doesn't seem as manufactured as, say most wrestling games.  Their commentary is pretty funny, since a chunk of it is stories about Blood Bowl and other various ramblings.  In the same vein, loading screens also have little "did you know" stories about funny Blood Bowl trivia.  Back in the day these were my favorite part of the codex, and it's nice to see a similar thing in the game.  Plus, these are all ones I hadn't seen.

One really cool and probably overlooked feature to the game is Cabal TV (like cable TV, only... more? evil).  It allows you to watch the games of other players, like it is an actual sport.  It has some stored on the server, but you can also search for live ones, or games played by your friends.  A cool idea, but not one I would personally use much.

Well, for better or worse Blood Bowl 2 really reminds me of the table top game I played many years ago.  Opposition is stiff, and I never really feel like I'm winning, even if I am.  Maybe that's because the AI always seems to get better rolls, or that their units tend to have an ability that makes it so I'm on the losing end of an exchange.  It's not a bad game, it just feels a bit too random for my taste.  It does feel very faithful to the physical game, but without the cost of buying all the miniatures.  Campaign is a nice distraction when you don't want to play with your friend or online.  I really enjoy the character of the game, represented by the announcers and the loading screen stories.  If you like the tabletop Blood Bowl, then I would recommend Blood Bowl 2.
Posted by The SAHD Gamer at 10:23:00 PM