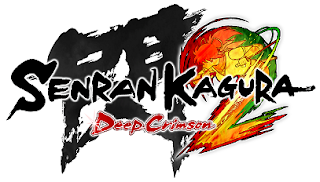 I enjoyed the first Senran Kagura on the 3DS, even though it was flawed.  I was excited for the Vita game, Shiovi Versus, and loved it even more than the 3DS entry.  So when Senran Kagura 2 came out in the US for the 3DS, I was again looking forward to jumping into the bouncy ninja world.  After all, this one could be even better!

Senran Kagura 2 is more of a 3D brawler than then the first (which felt more 2D).  Shinovi Versus, the PS Vita title, also was 3D, but sadly did it better.  It's really hard to keep enemies on the screen lots of the time, so it's easy to get hit and not know exactly where you should be attacking.  This was present in the other games, but it seems worse here.  You will lock onto enemies easily enough, but it doesn't lock the camera on them, making it next to useless.

The girls have a lot more differences among them now, with some characters having a power-up on the X Button instead of a strong attack.  The combo system doesn't seem as deep though, and chasing after a launched opponent is too slow.  Personally, it seems like one or two characters improved, but the rest either stayed the same or got worse.  The two worst (in my opinion) didn't get any better at all.  Enemies fell out of my super attacks often, or were knocked out by my partner.  Bosses and tougher enemies easily shrug off your hits and just start hitting you in the middle of your combo.  To me it's not that they changed a major thing and it screwed up the game, it's just several little things were either not changed or made worse.  Not enough to ruin the game completely, but enough to put a damper on my fun and enthusiasm for the game.

Frantic mode has also received an overhaul, as you don't have to choose it only at the beginning of a mission.  Now you can easily activate it when you are transformed and have full scrolls (super meter).  It will constantly drain health now but provide infinite scrolls.  If you hit enemies, you will regenerate some health and stay in the mode longer.  I like these changes because it makes it more of a gamble with better pay offs if you use it right.  The strength boost and infinite scrolls can make short work of a tough enemy, but only if you hit!  Lose too much health and you are kicked out of the mode and left with little health and no scrolls.

Easily the best addition in the game is the tag function, which allows you to have two people fighting at a time, either with one player switching between them, or two player co-op.  You also get tag team super moves to deal out lots of damage.  Co-op is done locally or online, and sadly I was not able to try either.  None of my friends have the game and when I tried to search online, there was nobody.  However, in single player it works fine except for one thing.  By default, the button to switch is also the button used to dash after a launched enemy.  While it will switch people and chase the enemy, it is more of an inconvenience than not.  Switching it with the R Button works better, but it just seems weird to have both functions on one button in the first place.

The story picks up right at the end of the previous game.  For better or worse, it actually includes fights from that game here.  It's nice for people who skipped the first one, but I didn't like it so much simply because I already did these fights, making the first chapter just a repeat.  However, the Orochi boss fight is much more refined and easier than that in the first game.  The cut scene before did have me ask aloud "Why does Orochi have boobs?"  This wasn't answered.  Another thing I wasn't too keen on: this story and Shinovi Versus can't exist at the same time, so three games in and we already have alternate timelines?  Really!?

Anyway, there are five chapters and over 60 missions in the game, most lasting 2-3 minutes.  There is still a fair amount of dialogue, and even some text plot, but not as much as the first game had.  The side stories that helped flesh out the characters are also gone, sadly.  Instead of two stories, one for each side, it is one single story with multiple events and perspectives.  The plot is enjoyable but just doesn't seem quite as deep as the first game.  They did compensate with a better enemy variety and actual bosses this time.  No more only fighting the other girls as bosses!

While there doesn't appear to be a free mode where you can use any character on any level, there is a Yoma cave that has over 100 missions on 14 floors.  The difficulty ramps up each floor, and you can do any level next to any that have been completed.  Some of the later floors will unlock weapon skins for the various characters, but I wish they were spread out a bit more.  On its own, this mode is pretty fun and you get some nice rewards for it.  It still feels like it is there to grind levels in place of free play on any completed level, and it isn't as good for that.


Besides weapon skins, you can equip up to three shinobi stones that improve your stats.  This is a great addition to the series and helps you refine or differentiate the characters.  To get a stone, you have to complete a challenge mission.  They have different requirements, like only dash attacks will damage, you can't get hit, etc.  The rewards are worth it since the stones help a lot.  Thankfully the challenge missions have to be done once, not once per side or character, and all characters can equip unlocked stones at the same time.  The challenge missions can get pretty hard, though.

I found some difficulties just making my way through the story mode.  A few times I would stop and run through the Yoma cave a time or two to grind some levels and make the missions easier.  Utilizing the new Frantic mode helps a lot in the tougher fights.  Overall there doesn't seem to be as much content as either the first Senran Kagura on 3DS or Shinovi Versus on the PS Vita.  However, doing all of the story, Yoma cave and challenge stages will get you your money's worth and and set you back 30+ hours.

Also unlockable are plenty of costumes to put the lovely ladies into.  You can also change their hair color and styles, and each costume has a few color choices.  There are a lot of options, which is always welcome.  There is also a photo mode where you can take pictures of them in various poses and even two at a time.  While these costumes will be shredded by either you or the enemies, the girls will stay in their undergarments.  No SD faces or beams of light in this entry!

One extra cool thing is the DLC character that you can unlock for free if you have a save file of Senran Kagura Burst.  However, you have to select an option in that game for it to save it separately.  Since it was a digital only title in the US, I would think this wouldn't be an issue.  It's only an inconvenience, but it seems dumb to have to do the extra step in the first place.  Oh well, at least then you get the character for free.  Even if he's pretty much a joke character, it is the first playable male character in the series!  There are also a few other pieces of paid DLC that add more costumes and missions.

Senran Kagura 2: Deep Crimson is pretty fun, but I think I prefer the first one to this.  I know I like Shinovi Versus better.  The tag mechanic is fun, even if it takes getting used to, and some of the changes are for the better.  It doesn't feel like there is as much content as before, but there is still plenty and the story is nice, too.  The stripping is still out in full force, but isn't as risque as the Vita outing.  So overall not a bad game, but a bit of a let down for me personally.
Posted by The SAHD Gamer at 11:57:00 PM