About a year and a half ago, Rainbow Moon came out for the PS3, and it has now found its way to the Vita.  The entire experience has translated very well, as it looks and sounds as good as the PS3 version.  The world of Rainbow Moon is very detailed, from lush forests to cluttered basements.  The music fits well for each location, and there even some voices in the game.  It's not really spoken dialog as much as it is battle noises and mutterings from townspeople and shops when you speak with them.  Still, a good visual and audible experience.

While movement is done on an appropriate-sized map, battles are all done like a grid-based strategy RPG.  You will have a limited field to move around on, and speed will determine turn order.  If you have ever played Rhapsody: A Musical Adventure, it is similar to that.  You move around a field, and contact with an enemy or a random encounter will shift the battle to a small scale SRPG field.  At first, you only have one character and can take one action a turn.  While it at first seems like there is no strategy involved in the strategy RPG, things change once you hit level 5 or so.  That's when you get your first sub-action.

Each sub-action allows you to do something in your turn, and your turn does not end until you have used them all or defended.  Soon after you will get your first extra character, and the tactics start to become apparent.  Should you move closer to attack or use a skill?  Should you end your turn guarding or do one more attack to kill one of the monsters around you?  Since bosses are a higher level than your party (unless you do a lot of grinding), you will need to use some tactics to defeat them.  There's even a rock-paper-scissors like compatibility chart for weapons to further change up the battles.  It is a lot harder to take advantage of that, since you can only have three characters in battle at a time and a character can't swap weapon types.

You get up to six characters, each using one of the weapons types in the game.  You can have up to three of them in a battle at a time, though.  A character's MP is used for their various skills, most of which must be purchased in the game.  The cost of each skill scroll will increase for any subsequent purchases, so if it's a skill that multiple characters can learn, expect to pay if you want to teach multiple people.  Also note that being able to equip amulets is a skill, so you have to purchase that ability for everyone.  Ugh.  The skills themselves are pretty useful, but the area of effect is a bit odd.  The effect square(s) is different from the targeting square, and the targeting area is where the targeting square must be.  So, in essence, some skills allow you to hit outside of what you would normally consider the area of effect, but cannot hit right next to the user.  It's strange, but you can get used to it after awhile.

Fights can be a mixed bag.  Most times, good tactics can overcome some uneven odds.  However, random encounters have random assortments of monsters from the area.  So, one fight might be against 2 of one enemy, and the next might be against 11 enemies of four different types.  Some of the bosses have more than 14 extra monsters in the fight!  The random fights definitely seems so, but thankfully you have to press the X Button to actually start the fight, so you can ignore them if you want.  That's really helpful when you need to get back to town, or are making your way through a dungeon, or just don't want to fight 10 enemies that all can poison you.  Speaking of that, poison is super powerful in the game.  In battle, it only damages you at the end of your turn (not every sub-action), but it takes more than 10% of your max health when it does damage you.  Ouch. 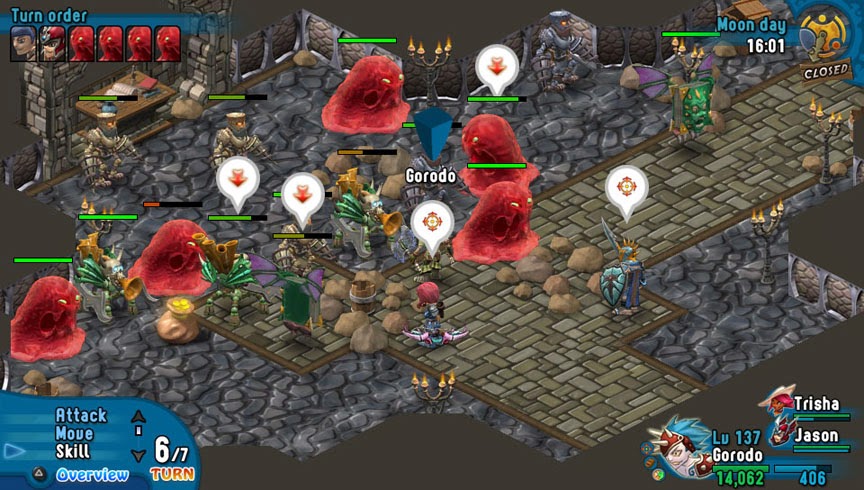 Besides gaining stats upon a level up, you can visit a special trainer called a Savant and exchange Rainbow Pearls to increase a particular stat.  I like that these can be used to tailor the character and either make them better at what they do or cover for a weakness.  Each level has purchasing limits, and stats cost varying amounts of pearls, but it's still fun.  The only problem I have is that only the character that gets the killing blow will obtain the pearls from the monster.  This can make it harder for newer or lower level characters to catch up to the rest.

The game can get pretty long.  It can take about 40 hours to complete the main story, and much of that time will be spent grinding so you can effectively fight the enemies in the next area.  If you intend to use more than the three starting characters, you will have to spend time to get pearls so their stats can improve.  You'll also need to get lots of money to afford equipment and skill scrolls.  It's very reminiscent of old-school JRPGs in those respects.

Looking at the PSN store, there is a lot of extra stuff you can buy.  Most of it is extra money and pearls for the characters.  These are very useful, if only to cut down on the huge chunk of time spent grinding.  However, that time spent grinding will help with the trophy for playing for 100 hours if you intend to platinum the game.  There's also a trophy for hitting level 500, which will take a long time.  Most trophies are for going through the story, and the last few are for spending lots of time with the game, getting lots of money and high levels.  It's one of the better lists for an RPG, since I prefer most of them for going through the game and a few for things to be done after finishing the story, rather than several at the beginning, and most at the end of the game.

Rainbow Moon offers an interesting mix of traditional RPGs and strategy RPGs.  Battles are entertaining and have some good strategy once you start getting characters, skills and sub-actions.  The game is fun, but seems heavy on grinding.  Time-wise, you do get a lot of bang for your buck.  It's a good game for anyone that likes RPGs to check out, especially on the Vita.  It's really good to play it for a few spare minutes or for a few hours.
Posted by The SAHD Gamer at 12:52:00 AM