Ever since trying the demo of DLC Quest when it was released on the Xbox Live Indie games section, I wanted to play the full version.  I picked it up during a Steam sale a bit ago and finished playing both it and the Live Freemium or Die sequel.

The core of DLC Quest is to lampoon the industry and how it pushes DLC on the consumer.  Boy, does it do it really well, too.  At first you can only move to the right and must "purchase" the DLC to be able to move left and jump.  Now, I should clarify (since the game does too) that you purchase DLC packs in the game with in-game coins, not real money.  It's a parody of the industry, not a money grab, after all.

Besides not being able to move anywhere other than right at first, your character also isn't animated.  That's an extra "charge".  Did you want to pause?  Get the DLC for it.  Music and sound effects?  Yup, gotta buy that from the store too.  It's a bit heavy-handed in DLC Quest, but less so for Live Freemium or Die.  However, that's really the point of the game, and it does it very well.

The style of the game is a very retro 8-bit style, like the old Super Mario Bros.  It looks fine (since I rather like old style-graphics) and plays well, even on my older PC.  I would recommend using a controller for the game, since it is a platformer, and playing those on a keyboard is painful.  I realize that might not be true for everyone, but it's great to have the option of using the keyboard or plugging in a controller.  I used the Xbox 360 controller, and had no issues with it, even with the infamous D-pad it has. 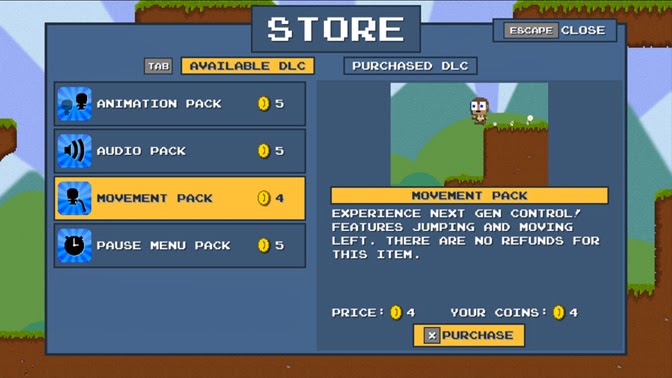 It took about 30-40 minutes to beat DLC Quest and get all the coins and awardments.  Yes, there are fake achievements in the game, and they make fun of "real" ones as much as you would expect considering the nature of the game.  There are a few hidden things (more in the sequel), and I didn't really get lost in the game.  It wasn't very hard, since there are no real enemies, but more of a relaxing, comical take on the industry.

The sequel, Live Freemium or Die, took about 90 minutes to beat, but there was one part where I was confused what to do to continue.  It's also a bit more challenging, since there are enemies (remember to buy the sword DLC) and death traps, but still not very hard.  In some ways, it's even funnier than the first entry.  Early on there's a load screen, which will immediately stand out in a retro game, and you have to buy the "Day 1 Patch" to get rid of them.  The game is funny, as does hit the nail on the head with a lot of its humor.

As stated earlier, it's less heavy-handed about the whole "DLC being out of control" thing, however, it does still make fun of it... a lot.  It's also a better game.  However, they are both very much worth buying and playing, especially if you have a sense of humor about the industry or are just tired of so many things being piecemealed out of a game to be sold separately for the "full" experience.  It won't set you back much time (or money if you wait for a sale), and is worth it for a good laugh.
Posted by The SAHD Gamer at 10:46:00 PM