After being available only on disc form, Mugen Souls has made its way to PSN.  Made by Compile Heart, it combines some of the best parts of Hyperdimension Neptunia mk2 and the Disgaea series to make a very unique game.

The story follows a creature named Chou-Chou who has amnesia and decides to conquer the 7 worlds and make them her own.  Joining her is a demon named Altis that is so clumsy at being evil she has been banished to be an angel and Ryuto, the mistreated pilot of the space ship.  Yes, I said space ship.  How else are you going to get to the other planets?  Basically, to make the worlds hers, Chou-Chou plans to make the strongest on each planet, the chosen hero and demon lord, into her loyal minions so the rest of the population follows suit.  The story is over the top, to be sure, and has a fair bit of humor in it.  It's definitely aimed at adults, since there are lots of breast and pervert jokes (and several hot springs scenes).

To make enemies into her peons, Chou-Chou employs a "Moe kill" technique that makes them fall in love with her.  And since everyone has different preferences as to what kind of girl they like, Chou-Chou has eight different personalities to cover all the bases.  There's Ego (default Chou-Chou), Sadist, Masochist, Graceful, Ditz, Terse, Hyper, and Bipolar...and you thought your significant other could be crazy at times.

This system translates into combat, which adds a lot of complexity and is fun to boot.  Each personality has different weapon and skill preferences (but anyone can equip any weapon, so you aren't out of luck when you switch).  Also, Chou-Chou can initiate a Moe Kill once per turn (and it doesn't take your attack!) by picking three phrases from the random list it provides you.  Each monster responds differently to each Moe type (personality), which determines which bar fills up when you choose your phrases.  You can either recruit the monster as a peon (which makes it a rabbit-like Shampuru), turn it into items, or piss it off.  If angered, the monster's HP is restored and it gets stronger.

Moe Kill is a very useful system that you will want to use often.  It's complicated, but you don't have to master it to use it effectively.  Turning enemies into Shampurus will quickly power up your ship's stats and unlock stronger attacks.  Making an enemy an item or killing an enraged one will also supply you with Shampurus, but not as many as making them a peon.  As long as you keep using it, you will reap the benefits with very little draw back.  I eventually learned that the Moe Kill's radius is determined by the equipped weapon's attack range.  Equipping a gun or cannon gives Chou-Chou an incredible radius, which makes it almost too good.  If you manage to Moe Kill the giant crystal on the battlefield, which ever effect you maxed out (peon, money or anger) will apply to every enemy left! Combat itself is somewhat reminiscent of Hyperdimension Neptunia mk2.  On each battle field, you have a set area that you can run around on to position yourself for attacks and skills.  Normal attacks can only target one enemy, but if your movement circle overlaps another party member's whose turn(s) are next, you can initiate a Link Attack.  There are very over the top, and you will see them often.  Well, unless you make judicious use of the skip button (R2) as I did after seeing all of them a few times.  Curiously, the Link Attacks don't always seem as strong as just attacking by yourself.  I don't know if it's just my perception of it, though.  Thankfully, you get plenty of SP to do skills, and they are very strong, so I usually just do those for damage.

A very useful and unique function in battles is Blast Off.  If using a skill, you can chose to have that attack push the enemy, causing them to crash into other enemies, crystals and even your characters.  They can even be launched into the air!  If the giant crystal is broken or Moe Killed, the battle will enter  "Fever Mode".  Launching an enemy into the balls in the sky will cause them to be bounced around like a pinball, giving you huge amounts of money at the end of the fight.  Not only fun, but practical, and so far it's the best way to make money in the game.  Also, entering Fever Mode will cause the normal battle music to be replaced with J-Pop.  I like that, but I realize it won't be everyone's cup of tea. 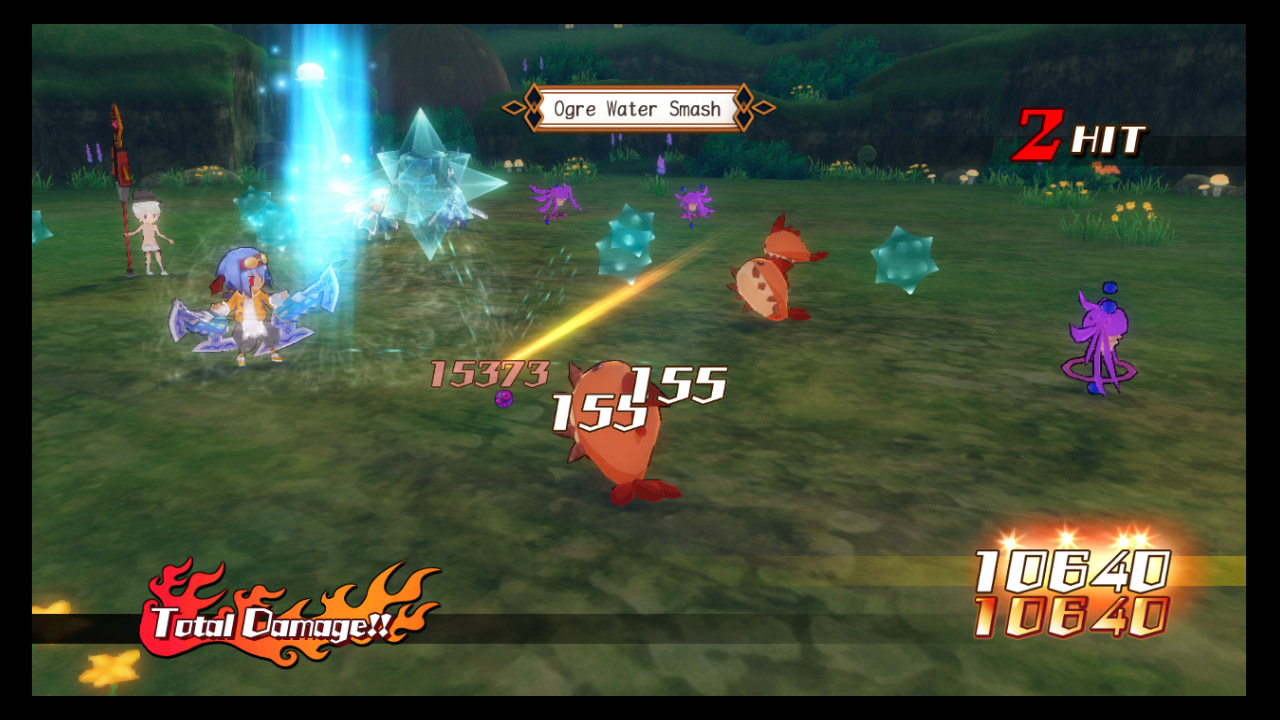 The character story graphics for Mugen Souls are really nice.  The dungeons and ship are unique and have good details, and there's even some really cool enemy designs.  Of course, if you have played any of the Hyperdimension Neptunia games, some of the enemies will look really familiar.  My son even asked me why "the enemies from Neptunia came over to this game".  My only real complaint with the look of the game is the character models during combat and running around the fields.  The characters in the game are all different, some are taller, older, um... different in other areas... but the models used in battle and traveling in the field are all the same base.  It's the same proportions, just with different hair and clothes.  I know this is because you can put clothes on all your characters and having to only make one size is much easier.  Still, it would be nice if they were more unique.

Speaking of clothes, it would be nice if there was a basic set on a character when you first make them.  I didn't purchase any clothes at first, since they were expensive, and was surprised when I made a character (a mage to round out my team) and they were just in underwear.  Since I would have felt silly battling with a person in tighty-whities, I sent them to the sub party until I was able to get them something to wear.  I'm sure my kids would have been laughing for ages had they seen a person fighting in their underwear.

Just like Disgaea, you will want to make plenty of the generic soldiers to fill out your ranks.  Not only is it important to have some backup characters for long treks through the Mugen Field (a place where you fight several battles in a row and after a few floors you can buy various upgrades to characters, new jobs, artwork, etc.), but you can also use them to teach skills to each other and increase stats.  There is a "Fuse Peon" function that will transfer skills and increase stats from one of your created characters to another or story character.  Both will start over at level 1, but the base character will be stronger when they get back up to the level they were at before fusing.  If you are familiar with the rebirth function in the Disgaea games, you'll be right at home here.  This system is ridiculously deep, but thankfully it's also easy enough to get results without mapping every character's growth chart in Excel. 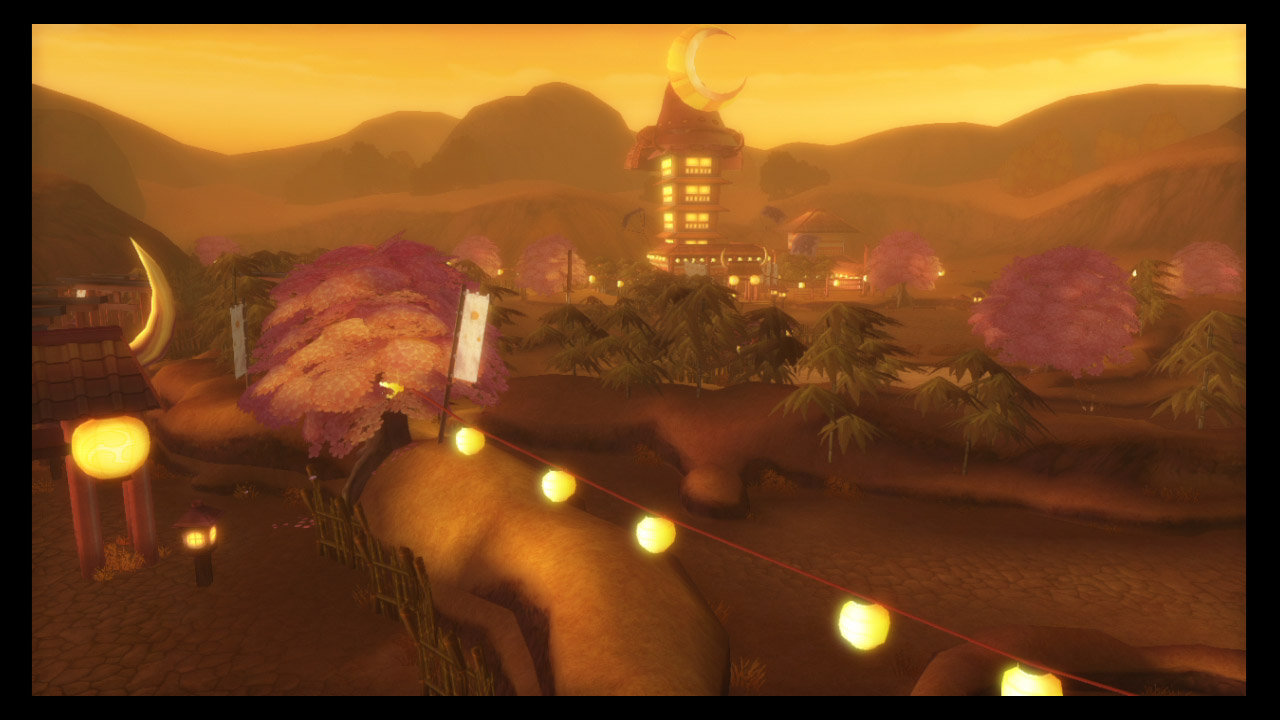 The game has dual language, and many of the lines are spoken.  It is worth noting that there are more spoken lines with the Japanese audio, if you want to hear all the game has to offer.  This is most obvious when using the created characters, since they only have spoken lines in Japanese.  It's a big jarring, but I didn't use them much anyway.  Another example is the ship battles.  These have voices in Japanese, but are silent when set to English.

It took me over 50 hours to complete my first playthrough of the story.  For the first six or so chapters, I made really good progress and was able to work through each world with minimal difficulty.  Starting in chapter 7, enemies and especially bosses started to get tougher.  Their levels and stats seemed higher than what you would normally get just fighting all the enemies in the area.  I had done a few runs through the Mugen Field during the chapters, but had to return to it time and time again to grind out a few levels.  It's not particularly time consuming, but it was a momentum killer to be sure.  Especially in chapter 9- the last boss of that is over level 100.  So, yes, there is a lot of playtime in the game, but some of it will be diving into the Mugen Field repeatedly to level up quickly.  Of course, this doesn't even take the post game super bosses (available after getting the "true" ending) into account.  New game+ is also in Mugen Souls, which is always awesome.  There are two separate endings if you want to go through the game a second time.

There is actually a healthy chunk of DLC for Mugen Souls.  The things that cost money are a few item packs and costumes from other games (Neptunia characters and even Hiro from the Spectral Souls games).  However, there are a lot of free items, notably some money, points, and some weapon and armor packs.  If at all possible, grab the free stuff.  It gives you a good leg up with the free equipment, and the points and unlocked battles can save you some grinding.  If you aren't interested in making the game a little easier, at least grab the money and clothes, if only so you can dress your army of peons!

Do you want the platinum trophy for the game?  Then be prepared for the long haul.  You get some trophies for clearing the chapters of the game and getting the endings.  There's also a few for doing various game mechanics, like Fever Mode, Moe Kills and massive damage.  Getting a huge peon ball (which requires over a million shampurus) and having Chou-Chou's charm levels at 100% will set you back many, many hours (a couple hundred).  So, yeah, if you are after the platinum...bring some snacks.

Mugen Souls is a very deep JRPG that has lots to offer.  The many systems in the game are introduced to you one at a time, so you can grow accustomed to it before learning more about the game.  The ship battles add a nice distraction to normal combat.  In essence, they are a more complicated version of rock, paper, scissors, but also really fun and worth a ton of experience.  There's a lot of playtime just to complete the story, but chasing the platinum will demand dedication (and lots of hours).  If you were a fan of Neptunia's battles and/or Disgaea's crazy characters and story, Mugen Souls is definitely a game you should check out, even if the story can get weird at times.
Posted by The SAHD Gamer at 12:27:00 PM