As an avid RPG and Action-RPG player, I'm always on the lookout for new games in the genre.  So when I heard about about Realms of Ancient War, I knew I wanted to check it out.  I dragged along my "Player 2" for all the hacking, slashing and dungeons we could handle.

Let's start with the graphics, since you will likely see the game first.  The graphics are good.  The style is a little more dark and gritty (think Sacred 2), as opposed to the more cartoon-y style of Torchlight and Arkadian Warriors.  And I do mean dark.  I had to turn up the brightness a few clicks so I could see everything.  The environments are very detailed and unique.  They aren't randomly generated, and that shows with how nice they look.  There's lots of little details that I like, too.  For example, in the desert there are scorpions that roam the sands (sometimes too many, though) and flies buzzing around corpses.  Lastly, the armor that you can wear in the game looks cool, but several pieces look the same on all three characters.

The best way I can describe the sound is average.  The music fits, but isn't memorable.  Voice acting in the game is average as well.  While it isn't the greatest you have ever heard, it gets the job done and the voices fit.  One problem, however, is that there isn't a noise when your weapon hits the enemy.  This can lead to confusion on whether or not you hit an enemy.  It also lessens the impact of an attack, making the combat less visceral.

Now we get to what I think is the best part of the game.  Each skill/attack is custom mapped to a face button on the controller, and a flick of the right stick shifts the palette to another 4 skills.  The part that really stands out to me is the "Focus" skills.  Once purchased, these will be linked to the prerequisite skill and activated by holding down the corresponding button.  This will not affect the cool down of the the prerequisite skill, so you effectively get more attacks attached to the limited face buttons.  I really like this idea!  Plus, I got to annoy my wife by always yelling "Hadoken!" when using the Focus skill for the Mage's fireball attack.

You might be wondering why I said "cool down" earlier.  All skills in the game require mana and have a cool down.  I understand your hesitation, since I had it too when I learned about it, but it is actually pulled off really well in this game.  While melee and ranged attacks take mana and have a cooldown, they take very little and are ready instantly so it's not an issue.  Mana regeneration is also really high because all skills take it, meaning I actually use my skills instead of hoarding my MP.  And with the hordes of enemies you have to fight, you will need to use all the skills you can. 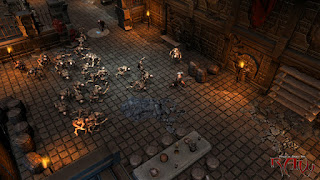 Of course, not all is perfect in this realm either.  A mini map would have been really useful, as would a dodge or block maneuver.  With how quickly you can get trapped and/or die, this would have literally been a life saver.  Since the skill palette swap is mapped to the right analog stick, there is no camera control.  This wasn't as bad as I thought, since I would've only liked to rotate the camera in a few instances.  Also, the experience gain seems very random.  You cut through hordes of enemies for seemingly little experience, only to level up when you least expect it.  Last but not least, I would like the skill descriptions to have actual numbers instead of vague wording.  What can I say?  After playing RPGs for years, I like my numbers.

Each stage takes about 30 minutes your first time through, if you are looking for all chests and whatnot.  Length-wise, the game is good.  It doesn't drag out and it's not over in an hour, leaving me feeling that the length was about right.  If you are interested in the achievements, your time will triple since you have to beat the game with all 3 heroes for one of them.  The rest of them aren't very hard or lengthy, which can be good news if you are a gamerscore hunter.

Lastly I'll talk about the co-op.  I had lots of fun with it.  This style of game is always more fun with another player, and this is no exception.  If you have a buddy to play with, I would say it's worth the $15.  With two people to battle the hordes of monsters, the game is made easier.  Death isn't as strict, since if the other player can survive for five seconds, the dead player will resurrect instead of just paying a lifestone and heading to the checkpoint.  Unfortunately in that situation, the camera will keep the dead player in view, so you can get trapped while trying to live those precious few seconds.

While a lot more fun, the co-op is not perfect.  For whatever reason, there is no online play, so if you don't have a buddy nearby, that may be a deal breaker.  If you can only play this game solo, definitely check out the demo first or wait for a sale.  Also, the second player isn't saved, so they lose any loot/money that they carried when you end the game.  There is a workaround, but it would have been better to just have another save of that character, or to just use any other character's save.  So while online co-op would have been nice, at least there is couch co-op, which unfortunately most companies forget about.  Some of us actually have someone in our house to play with!

To end here I'll leave you with a story.  To try out the co-op, I enlisted the help of my wife.  We've gone through lots of two player games over the years, so I knew she would want to try it out with me.  When we started out, she lamented the camera controls, the only saving after a level, and that it didn't save the second player.  The longer we played, the less she mentioned them.  The next day when she came home from work, she had a big smile on her face while asking, "So, are we going to play again?"  I wasn't the only one who really liked the co-op it seems.
Posted by The SAHD Gamer at 11:32:00 PM