Aksys kicked off their "Summer of Mystery" with Psychedelica of the Black Butterfly, the first of three visual novel games on the Vita coming out this summer.  Readers of my reviews know that I like visual novels, so of course I secured a review code to check it out.  And hey, this time the female protagonist has spoken dialogue!

The story takes place in a mysterious mansion that the heroine suddenly wakes up in.  With the help of some men she meets inside, they will try to survive and ultimately escape the nightmarish house.  While there are some familiar premises to the story, like an mysterious location and lost memories, the story is otherwise unique and interesting.  It moves along at a good pace, not moving too fast nor getting boring, and has some twists that I did not guess.  Toward the end, I was very much into the story, and wanted to see it through to its conclusion. 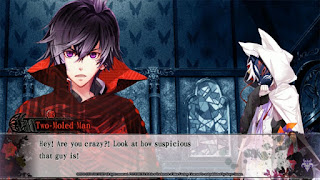 There are some choices to make while going through the game, but not as many as you might think.  In fact, the game isn't quite structured like most visual novels I have played.  For one, the story is mostly linear, which small branching paths that tend to meet back up where they should.  Character specific routes and endings are present, but they are smaller and shorter than expected, and don't occur in the most common places (ie, near the end).  While I did purposefully pick a bad ending at one point, I was surprised to see the ending I got at the end of the game marked as the "best" ending.  While it does seem the most realistic (as much as it could be), I thought for sure there would be a super happy "best" ending, where everything comes up rainbows.

All of the story scenes are contained on a big flow chart.  It shows when scenes branch off, and even has a mark that tells you when all conversations in that scene have been seen.  It's very easy to jump around and complete the parts you missed.  I very much like that aspect of it, and am enjoying completing as much of it as I can.

However, the game also has some extra scenes called short episodes.  While good in theory, there are several times in the game where you have to view some of these short episodes to progress further in the main story.  In other genres I can be okay with that, but in a story driven game, it feels jarring.  Being forced to stop and go read side stuff really breaks up the flow (and immersion).  I do like them as optional scenes to help unlock character specific routes.  At least, I think they help with that.  Most of the side episodes are locked, and have to either be purchased with points earned from the mini-game, by completing certain other scenes, or both.  It's not explained too well, and there are plenty of stages don't mention the requirements.  You just keep playing and viewing scenes, and eventually it opens them up. 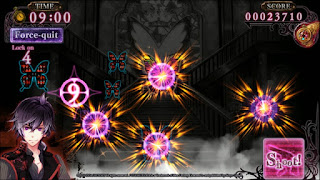 At a few points in the story, there is a shooting mini-game to play.  It partially makes sense because you have to defeat the mansion's monsters to survive.  However, you are locking on and shooting butterflies, which aren't the monster.  Regardless, the mini-game is kind of fun.  You either move the cursor or drag your finger across the butterflies as they move around the screen, then press a button (or the on-screen "shoot" button) to fire.  It's fairly simple, but fun.  It's also not the most accurate, since many times I would drag across a butterfly and it wouldn't lock-on.  Also, it is really easy to miss some of the butterflies, since they only stick around for short, random intervals.  This is the method of getting points used to unlock some of the side episodes, and it was fun to play it enough to get all the points I needed for the side episodes.

Overall, I think Psychedelica of the Black Butterfly is a good visual novel.  There are some text errors, and the side episodes can take you out of the story, but that story is really good, especially near the end.  I'm having fun trying to fill out the whole flow chart.  I'd recommend it for visual novel fans, but it's not the longest complete package.

The Bad:
Side episodes break the flow of the story, and there were some text issues.

The SaHD:
I didn't think they would explain the title so fully.  It was nice that they did, but I admittedly then thought "roll credits".

(Review code for Psychedelica of the Black Butterfly was received from the publisher)
Posted by The SAHD Gamer at 10:32:00 PM