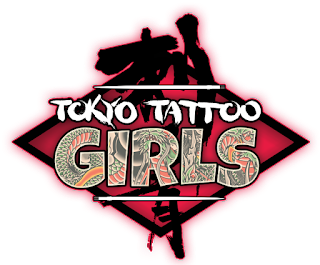 While it might not seem like it at times, I am a bit selective of what games I review.  There have been some titles that I've pre-screened and decided against.  When deciding if I wanted to ask for Tokyo Tattoo Girls, I couldn't find any gameplay footage.  Even the official site had two vague screenshots.  I decided to jump in anyway, if only to satisfy my curiosity.

When you first start a new game, you get the backstory, pick a girl, and go right into the thick of it.  Well, you can view the tutorial before you start, and I'd recommend it.  At this point I quickly discovered why there wasn't any gameplay videos.  Most of the time, you are just staring at the map of the 23 wards.  Every few seconds, a day passes in game, and you will recruit more punks and clanswomen from every ward that you have started to invade.

There is stuff you can do, but a lot of the game happens automatically.  Each turn/day you earn some money, which you either use for a skill, or to create or upgrade a tattoo.  Most tattoos will increase your charisma or threat.  Higher charisma will recruit more punks per turn, and threat does the same for clanswomen.  These tattoos are also more effective in certain zones.  It does say on the zone what types it is, but there's no way I'm going to keep which zone is what type straight when there are so many of them.  I just went with "raise both stats and it goes faster".  It sounds silly, but it works.

Money can also be used to pay for temporary effects, like recruiting more people, or restoring your honor (life bar).  There is a second page of skills, which I didn't even know about until I had gone through the game three times.  Restoring your honor is useful, since running out is game over, but most of the other ones aren't that great.  There is one that encourages the girl to invade a new zone.  This one is a bit strange, since they pretty much start invading much faster than I would like them to.  I did use the skills early on, but eventually just do them for the associated trophies.

As your girl barrels through the zones, invading a lot of them at the same time, sometimes they will turn red.  When they do, the alert level is high.  You can use a skill to reduce this, but not for long.  Sirens will randomly appear on these zones, which denotes a clan war...I think.  If you click on it, you lose some honor and it goes away.  Sometimes a little graphic appears with character pictures moving toward each other.  I won most of these, and you don't lose honor if you win.  I don't know why some have the graphic and others don't.  I'm pretty sure it's just random, as most times I had many more people in the zone, but still lost the turf war. 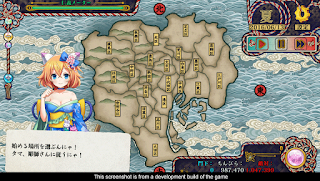 When you recruit every person from a ward, you will then find the boss.  After some dialogue, you get to make a choice.  There are three results: okay, good, and super.  "Good" and "super" will restore some honor, while "okay" does not.  Regardless, you will win the fight (that they don't really show) and take over the ward.  If you answered the "super" answer, you will get a special CG picture of the ward boss, which can be seen again in the extras menu.  Since there is a line of dialogue with each one, you have to unlock each boss' picture with each of the playable girls.  It would be nice if subsequent runs with the same girl marked which answer(s) you gave and the rating.  Like the ward types, there's no way I'm going to remember 23 different answers for six different girls.

There are four difficulty levels, and you will get a special item by completing each level with each girl.  These can be used by everyone in a subsequent game, so there's no reason to skip the easy setting.  My first game was on normal, and I won.  Completing normal with a girl will unlock hard difficulty for her, and completing hard will open the hardest difficulty.  While there were some times my honor was low, I was never in any real danger of losing, even on hard (I haven't done the hardest yet).  Once you figure out what you have to do, the game isn't too hard to complete.

Each run takes about 2 hours or so, depending on difficulty, skill usage, random events, and what tattoos you buy.  With six girls and four difficulty settings each, that can be a lot of staring at the map as it changes colors.  I went through four times with various girls on different difficulties.  If you want the platinum trophy, you have to go through the game with each girl at least eight times.  That seems a bit excessive.

Tokyo Tattoo Girls is definitely a unique game.  While there isn't a whole lot happening on the screen at any given time, you do have to pay attention and do some mirco-managing.  Even so, it's kind of relaxing and I found some enjoyment playing the game.  I don't know if I'd recommend it, since I think most people will be turned off by the lack of things to do.  People that enjoy sim games might enjoy it though.


The Good:
Unique game, can be kind of relaxing.

The Bad:
A lot happens automatically, and not a lot is going on most of the time.

The SaHD:
I once had 17 zones taken over at the same time or within a turn of each other...that was very hectic, as I barely had a chance to save or even use a skill between dialogue scenes.

(Review code for Tokyo Tattoo Girls was provided by the publisher)
Posted by The SAHD Gamer at 10:31:00 AM