I first saw gameplay of RWBY: Grimm Eclipse when Achievement Hunter played the game over a year ago.  A co-op horde hack and slash starring the lead team of the show looked fun.  The game has now been ported over to the Xbox One and PS4, and there's even DLC to play as team JNPR.  Nice!

The X Button is your normal/quick attack, while the Y Button is your stronger attack, which can be charged for more damage.  You have a few attacks in your attack string, and pressing the strong attack at certain points of the combo will result in a unique combo ender.  This is similar to Dynasty Warriors.  As a big fan of that style of combos, I really like to see it in other action games like RWBY as well.  The combos aren't as long as DW, though.

However, they are a lot faster.  In fact, all of the game's action is fast-paced.  This makes it hard to get the exact combo ender you want, but it's not as much of an issue as you are blazing around, attacking foes.  The B Button is used to counter enemies, but the timing is very strict.  If you don't hit the button when it flashes above the enemies, you will probably get hit.  Hit it too early, and you get hit.  Maybe I'm just too old, but the countering seems too strict for me.  I'd prefer to dodge, which you can do with LB, but even that won't save you from most attacks.

To round out the attacks, you can sometimes perform team attacks on stunned enemies.  While they are called team attacks, you don't actually do them with another person.  It's more like one person sets it up, and another does the team attack.  You can still do them in single player.  Lastly, each character has an ultimate attack that uses a meter.  These are strong and (when upgraded) wide attacks that are great to use in a pinch, or just to get some more damage.  They build up pretty quickly, but shamefully there were a few times I tried to use one when I didn't have the meter.  Yup, I got hit. 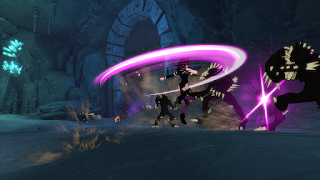 Thankfully, there is a single player mode where you make your way through the 10 campaign levels, and they are balanced for a single person.  Well, mostly.  You can still die very easily, and dying will end the level.  If you jump right back into the level, you will be at the last checkpoint, so you don't have to do the whole level over again.  Though the levels aren't that long (about 10-20 minutes without dying), and you keep any experience you gained beforehand, so you might want to re-do the level again (or even previous levels) if you want to get stronger and make it a bit easier on you as you make your way through the game.

You can't really smash your way through the game, even on the normal setting.  Enemy damage is too high, and defeat can come on very quickly.  Especially considering enemy attacks have ridiculous tracking and also too large an area of effect.  There were plenty of times that I was visibly outside the range of the enemy's attack, yet it still hit me.  The final boss is a real pain in the butt if you are solo, too, mostly because it will continually summon some of the most annoying enemies in the game.

The level cap is 10, which is enough to get you some nice skills and upgrades.  Some upgrades are either/or, where if you choose one, you can't choose the other.  You also won't get enough skill points for everything, but you can refund your skill points on the stage menu.  This is great so you aren't stuck with skills you don't like, or can even tailor your character for solo or group play.  Many of the skill upgrades must be unlocked, some by the specific character and others among all characters, so better ones may require you to grind for a bit.

For multiplayer, you can do the campaign levels with up to 4 people (note that they are harder, since it is balanced for multiple people), or do a horde mode.  The horde modes has a few different stages, where you must defend objects from enemies.  As you make your way through the waves, more points open up, making it much more difficult to defend them, and likely splitting up your team.  Hopefully you have enough currency to place a turret or two.  If you fail and let even one object get destroyed, that's the end of the horde match.  I would have liked the ability to restart on the current wave, or even be able to lose a point or two before failure.  Your character's level carries over from the other modes, so it's best to at least have a few skills under your belt before trying to get to the higher horde waves. 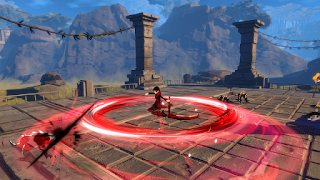 While playing online, I did run into a few issues.  Sometimes it would drop me after completing a map or stage, and once it was stuck on the result screen.  At first the game would show what characters the other players were using, which was helpful because some achievements are tied to things like that.  Then, it stopped showing that until I was actually in the game.  Yeah, that made getting the achievement for using all of Team RWBY more satisfying from a blind pick, but it would be nice to take the guesswork out of it.  While of course there is lag in any online game, it can be a real killer here.  Fast action, tight countering and high damage are not a good mix with a less than perfect connection.  I've heard of a few other issues, but there is a patch on the way to address and hopefully fix some of these.

If you are a fan of the show, or multiplayer hack and slash horde-style gameplay, I'd definitely recommend RWBY: Grimm Eclipse.  It has some flaws, but overall I had fun playing the game.


The Good:
Fast paced combat, characters and voices straight from the show.  Quick stages and online horde mode makes for good pick up and play.

The Bad:
You die quick and often.  Enemy hits track too far for my tastes.

The SaHD:
I'd really appreciate it if I could turn off the rumble.  It's largely unnecessary.

(RWBY: Grimm Eclipse code was provided by the publisher)
Posted by The SAHD Gamer at 2:28:00 PM