Can you defeat a boss with a trillion hit points?  That's the basis for Trillion: God of Destruction.  Even by JRPG standards, that is a colossal amount of HP, and it is your job to whittle it down and defend the Netherworld.  To accomplish this, you will need the help an Overlord sharing your power.  While the beast sleeps, you must train and prepare...lest it consumes you as well.

There are two main phases in the game.  There are the actual fights against Trillion, and the training period while it rests.  Before Trillion awakens, you have a certain number of cycles and days (1 cycle is 7 days).  Each of the training selections takes 1 day and has a particular focus, usually on a certain type of experience.  Each stat you raise and skill you purchase requires a certain amount of the different types of experience.  It's better for each character to go with their strengths and not round them out, as the normal enemies are easy and Trillion has, well, a lot of hit points.

Training will also increase an Overlord's fatigue, so you will need to tell them to rest (otherwise you risk injury) or use an item on them to lower it.  The blacksmith will increase the power of your weapon, which costs money.  Each weapon will also have up to 8 slots (that you also unlock with money) that you can put seals onto.  The seals offer various effects, most of which are stat boosts.  To round it out, there is also a shop that sells some items, seals and equipment.  You shouldn't have to buy much of that, as you can find a lot of things in the Sword Valley.  The shop also sells devil envoys, who are A.I. controlled helpers that will fight with you in the Trillion/Mokujin fights.  If they perish during the Trillion fights, they are gone for good, so make sure to buy and equip another.  They are actually pretty useful.

During the cycles, there are also random events that can happen.  These usually involve you choosing an answer to something, and they can have different effects.  Some can give you an item, extra experience, or even give your Overlord a status ailment.  You will see the same ones several times, but even then the choices don't always lead to the same result.  Eventually, you will learn which ones are worth doing, and some have no downsides to them.  All in all, you are subject to the random number generator (RNG) for many of them.

While each Overlord has HP and MP, and anyone who has played an RPG will understand those, they also have a third meter, called affection.  This represents their feelings toward the Great Overlord, and in battle acts as a shield for their HP.  It is very important, since having some allows you to retreat from the Trillion battles.  Giving the Overlords gifts and spending time with them (in the Rest menu) will raise their affection for you, and also give them more affection meter.  There are many gifts in the game, and each of the Overlords reacts differently to each one.  However, each has a few presents that they absolutely love, and giving it to them gives a big boost to affection and a little scene with them.  As their affection rises, spending time with them will trigger special scenes, some of which have a CG image that unlocks in the gallery.  Plus, sometimes you can find the Overlord in the hot springs, since I'm sure you were going to ask if that was a thing in this game.  Worry not, it is here!

There are other fights besides Trillion itself in the game.  While the training segments are more akin to a simulation game, the fights are like mystery dungeon games.  The area is laid out on a grid, and the enemy only takes an action when you do.  Normal attacks can be directed at any of the 8 surrounding squares.  You can change the direction you face without moving (which is very helpful), use items or active skills.  Being able to plan your actions is very helpful to avoid damage and get to your goal fast enough and safe enough. 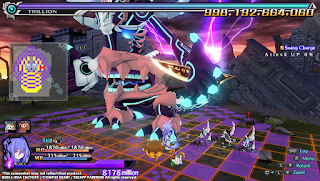 Combat will be in one of three places.  The most obvious are the fights against Trillion, but they are also the least numerous.  The second is against a monster called Mokujin.  At the beginning of each cycle, Mokujin will take the form of Trillion and you can do a practice battle against him to better learn how to fight the final boss.  These are really, really helpful for learning strategies and gaining valuable experience.  However, they also stop when you need them most.  I won't spoil why, but needless to say there was a time I needed Mokujin and he wasn't able to help.

The third area for fighting is the Sword Valley.  These are randomly generated and you must reach the exit in the specified number of turns.  There are a set number of enemies and treasure chest strewn throughout the area.  You will want to get what you can, since every enemy killed is experience and the items and equipment you pick up may be useful.  If you are running low on moves, remember that some skills will move you multiple spaces with one move, provided you have the MP.  The fights in the valley are the easiest in the game, since by the time you dive in, you probably can kill everything in one hit.  This is the grinding area, though, not the hard part of the game.  That's what Trillion is for.

So, what happens when...I mean if, your chosen Overlord is overwhelmed by the gluttonous beast?  First, they get to execute their death skill.  there are a few to choose from, and can either do extra damage (I'd love to actually kill Trillion with one of these...so dramatic!), power up the next Overlord or other things.  The one I prefer is Demon Barrier, since it extends Trillion's rest period.  This gives you more time to buff yourself up.  After that, the next Overlord is chosen, and gains a portion of the experience earned from the previous one so you can hit the ground running.  During the fight, if you still have affection, you can retreat.  This will give you more time to train, but you can only do it a few times per girl.  Use it as much as you can...the extra time and experience really makes a difference!

Even when you know you are going to lose one of the girls, it can still be a sad experience.  The sense of loss is one of the driving themes of the story.  I figure it is possible to defeat Trillion your first run through the game, but it is very, very unlikely.  Or I'm terrible at the game, I'm not sure.  It's fine to me that you can't win the first time, since you gain so much while failing.  My only gripe with it is the end.  It's probably not a spoiler to say that if you run out of Overlords to fight against Trillion, you will lose.  When you finally do, it's a small scene and then a game over screen.  It feels really lackluster for such an inevitable outcome.  I'd prefer it more framed as a 'bad ending' rather than just outright losing, since most players that complete the game will see this as their first ending.

There are obviously multiple endings, depending on who manages to slay Trillion.  Since it is very likely you will fail to do so, the game has a nice new game+ feature.  Each girl will keep the experience they earned.  You will have to re-buy their stats and skills, and their weapons will return to the default state (meaning you lose its levels and seals).  I'm fine re-buying the skills, but the stats is a bit annoying.  It's not a huge deal, but you will end up holding the button for awhile to catch them back up.  The weapons returning to the default is the biggest bummer.  Lesson learned: don't spend much on an Overlord unless you plan for them to win.  You also lose any items they had equipped and any tokens for the prize machine and Sword Valley.  However, you keep all the money you had, along with all the items in storage.  This includes the affection items, so spend all the tokens you can before the end!

I'm not 100% positive of my playtime, since I don't see anywhere in the game to track that (which is annoying), but it had to have been over 40 hours.  The time is variable depending on what you do, the choices you make, and if you get more of it through the various means.  Still, it took a long time to get through the game once.  At times it felt a bit long.  Without spoiling anything, there were a few extensions that I did not expect that kept the first run longer than I would have initially thought.  It feels kind of weird to complain about a game taking too long though, but at times it felt this way.

Overall, I very much enjoyed playing Trillion: God of Destruction.  The concept is great and the execution is well done.  Training and combat are simple to understand, but offer some depth if you think a little outside the box.  It's also unexpectedly emotional at times.  The new game+ option is really good and helps you finish off the boss with repeated playthroughs.  I do have a few minor gripes with the game, but they aren't things that diminished how much I enjoyed it.  The game is long, almost too long, and offers a lot of value if you enjoy it as well.  I would recommend JRPG fans check the game out.  It is fun and one of a kind!

(Review code for Trillion: God of Destruction was supplied by the publisher)
Posted by The SAHD Gamer at 10:24:00 AM