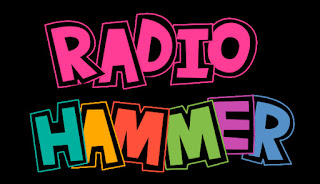 RadioHammer is a downloadable rhythm game where you play as one of the DJs from a pirate radio station.  Instead of a traditional beat you have to keep, the "beats" are enemies that you have to hit with your large weapon (usually a hammer), all with some really nice sprite artwork.  The style of the game is unique, and I like it.

However, my favorite part is how it handles the notes.  As mentioned before, they are enemies that your character hits with their weapon.  The closer to the target the note is, the better the points you get.  The note scores range from best to worst is: perfect, great, good and bad.  Scoring a "bad" or missing a note will break your combo.  Each DJ has different enemies that relate to where they are and what they are doing.  MC Wayne has aliens shaped like notes and Simply Lita has zombies.  The first DJ, July Ann, easily has the best enemies.  They are perverts that, if not hit, will run up and flash her.  No, you don't actually see anything, but I think it's hilarious that those are the enemies she has to fight.

The enemies travel across either a high or low track, and you have to attack the appropriate one as they pass the target marker.  Sometimes presents will appear from behind you.  Grabbing the white ones will give you some bonus, like extra life or fever meter.  The green presents are traps, and have the opposite effect.  There's also a fever meter that builds as you attack enemies.  Once it is filled, the background changes for a bit and every hit is a perfect.  The first time I got MC Wayne's I actually messed up, since it is very different from July Ann's.  I expected a change, but not giant people with MC Wayne fist rings.  I was too busy being surprised and laughing to keep the beat that time.

Each stage has up to three stars you can earn.  The first is always completing the stage, but the other two can be things like grabbing all the presents, getting a certain amount of perfect hits, and other similar things.  They don't really do anything other than give you an excuse to replay the level and get them all if you want.  I think I would have preferred it if they could also unlock stages, so if you were struggling on a particular song you could move on to another DJ or something.

The gameplay is not super unique, but I like that it's not very complicated, making it fairly easy to play.  That isn't to say it doesn't get hard, as the game does get difficult.  The notes come faster and more numerous as you progress through the levels.  Plus, while the songs aren't that long by themselves, several levels will link the songs back to back as one, especially right before the boss stage.  These are pretty hard, since you have to make it the whole way through multiple songs with one life bar.  It becomes slightly easier once you realize that the enemy graphic will key you in to some of the rhythm.  One graphic is for a solitary note, another is a pair, and the third look is for a set of three.  I started to do better at the songs once I noticed they weren't just different graphics for the heck of it.

There are three basic ways to play the game.  You can use the touch screen to hit the notes, the face buttons (B, X, etc.) or the d-pad directions.  All of these are listed on the touch screen so you likely won't forget.  You can also use any kind of combination you want of the three, and easily switch mid song.  Well, easily if the song isn't too fast.  I favored the face buttons to hit the notes and the d-pad for the presents.  Although using only the d-pad came in handy for a few harder levels (notably MC Wayne's boss level).

In the story mode, the DJs are unfortunately unlocked sequentially, and that is because each one has harder songs than the next.  The first three DJs each have 3 episodes with 5 songs in them, and the last song of the last episode is the boss fight.  The fourth DJ is a guest character that is basically unlocked when you beat the game.  Once you beat a stage, you can do another version of it, which only has one track, but is much faster and with  more beats.

Other than the story mode, there is also Track Play, where you can play any song by itself.  Doing songs this way rates you with medals instead of stars.  There's also a random mode where you will play a random song at any difficulty.  A jukebox feature lets you listen to any completed song (my favorite is Oriental Girl), and finally there are trophies to earn in the game.

RadioHammer is a pretty fun rhythm game that is easy to pick up and play.  If you are skilled enough, you could beat the game in a day, but there is some replay value in collecting stars of doing Track Play.  If you are like me and not great at the game, you can still make your way through most of it fairly fast.  However, as a $5.99 downloadable game, the length and depth seem right (Note: I received a code for the game).  If you like rhythm games and would like a small game to play for a bit, RadioHammer is a fun and quick choice.
Posted by The SAHD Gamer at 11:33:00 PM