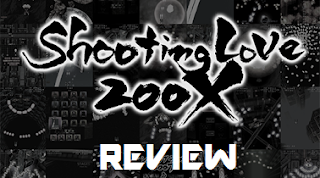 Shooting Love 200X had somewhat of a stealth release recently on Xbox Live Arcade.  Since return readers might know I am a fan of space shooters, I was excited at the prospect of another shmup (shoot-em-up) crossing over into the US.  I was even more excited to give it a try.

When you first boot up the game, you have to take a gamer age challenge, where it asks you to perform in a few shmup-based minigames.  This part is reminiscent of Wario Ware and Brain Age.  It rates how well you perform in a few key areas, and will calculate your "gamer age" at the end.  At first, I got 40.  That is a little older than I am, so I tried it later and got 24.  That's lower than my actual age, so I felt pretty good about that.  Anyway, a there are many variations on the different games that they judge you on, and many are unlockable so you can practice them.  Which is good, since I'm not a fan of "you have a split second to figure out what is going on, now play this!" style.  Once they are unlocked, I can practice them so when they show up in the gamer age challenge, I don't start with a rush to figure it out.

Thankfully, that is not all that Shooting Love 200X has to offer.  It also has three distinct shoot-em-ups to play.  The first is called Exzeal.  You can choose one of five ships (one is well hidden) that have different attack styles.  One has a charge shot that flies straight ahead, another has a 5-way charge shot, the third has no charge shot at all, and the fourth normal one has a short range shot to the side.  Obviously, each plays differently, and each gains a point multiplier bonus based off its primary function.  For example, hitting multiple enemies with the first ship's charge shot will give a high multiplier, but just killing an enemy won't.

The ship with no charge at all was my favorite.  It seemed the easiest to make it through the stages.  Actually, making it through the game is a challenge in and of itself.  You only get so many continues, and it can be very easy to die.  It is possible to gain some more continues, but it takes a lot of playtime to do it.  While Exzeal seems more about points than making your way through the game, this isn't actually the case.  It's both, which is unusual to me in space shooters.

The second shmup game is Tri-zeal.  This one was easily my favorite part of the whole package.  You have only one ship, but it has three different weapons that you cycle through.  Each weapon can by powered up five times to make them stronger and more effective.  The spread shot shoots more bullets, the laser is stronger and there are more seeking missiles launched.  As an added bonus, whenever a weapon is fully powered up, you will get some of when using the other weapons.  This bleed effect is nice, since you get a nice reward for using a non-fully powered up weapon.  I easily preferred the spread shot, as it was the most useful to me, and would power it up first.

The third and final shmup contained in the package is Minus Zero.  It has a strikingly different visual style, akin to Geometry Wars, and offers only lock-on shooting.  The reticle is a fixed distance from your craft, and you can only shoot once you have passed it over an enemy.  Once you have done that for one or more enemies, shooting will launch a laser at each target.  Targeting and then eliminating as many as you can at once is the best way to get a high score.  This was easily my least favorite of the three, and maybe the least attractive of the whole game.  It wasn't bad, it just wasn't very fun for me.

The achievements for the game are harder than I first thought.  You have to find little hidden things, excel at the various gamer age games, and perform well or complete the three shmups.  They aren't impossible, since you can set it on easy, but harder than it would first seem.  There are some cool extras in the game, too.  For one, you can start on the second player side, which is the first time I've seen this in a shmup that I can remember.  You can also check the buttons from the pause screen.  I'd recommend doing this, since all of the games seem to use a different button configuration.  It's a strange decision to be sure, but you can configure them to your liking.

I enjoyed playing Shooting Love 200X.  The gamer age games are fun once you know what they are.  It's a crazy mix of shoot-em-ups/space shooters/shmups and Brain Age, and it works really well.  There are also three different, full shmup games to play.  I still don't like using that word, but it is much quicker to type out.  Anyway, the whole package is great for shmup fans, especially the more retro inclined ones (Raiden, 1942, etc.)  The gamer age games are more about reactive dodging than pattern memorization, while the included shmups are a good mix of both.  An overall fun experience, especially Tri-zeal, which is my favorite part of the whole game.
Posted by The SAHD Gamer at 3:11:00 PM