I love bullet hell games, so I have no idea how I missed the existence of the original Jamestown.  Once I saw the plus version was coming to PS4, I knew I had to give it a try.

Jamestown+ is a very retro feeling shmup, mostly thanks to the graphics.  I'm always happy to see good old sprites.  The music is also reminiscent of older arcade shooters, but is wholly its own.  The story is pretty original too - you are on a mission to clear your name by battling the Spanish... on Mars.  Yes, in this game's alternate reality, we traveled to Mars in the 1800s and are battling the combined forces of the Spanish and the Martians.  It's pretty silly, but I like how far out there it is.

Before you start a stage, you choose one weapon to use.  There is a good variety once you have purchased them from the store.  Granted, I heavily favored the default one, since it was a great mix for my playstyle.  The X Button fires your normal shot (I later changed this to R1 since my thumb was starting to cramp), and Square is your special shot.  Both are unique to whichever weapon set you choose.  As mentioned before, I favored the one you start with.  The normal shot is a spread, and the special shot is a focused laser for damage.  It's basically what I would want, but I made sure to try a lot of the other ones after I had unlocked and purchased them.  There is a good variety of weapon sets to try, as long as you can meet the requirements to unlock them, which sadly includes beating all the stages on the higher difficulties.

The other ability at your disposal is the Vaunt system.  You have to first fill a meter by collecting the little gears that appear when you kill enemies.  Once it's full, you can activate a bullet absorbing shield for a brief time, and then you have 1.5x attack power and double score until the meter runs out.  The non-mandatory tutorial explains it pretty well, so make sure you check it out in the game.  I didn't at first, so I wasn't really using it properly.  I treated it as a shield at first, but it is much more effective to increase score and as an attack buff.  Once I treated it as such, I was routinely getting five star scores and killing enemies faster.  It can very much still work as a very short shield, so figuring out when to use it will make the game easier.  Sadly, there is not bomb item, and the Vaunt system is as close as you can get, so you might as well make it work for you. 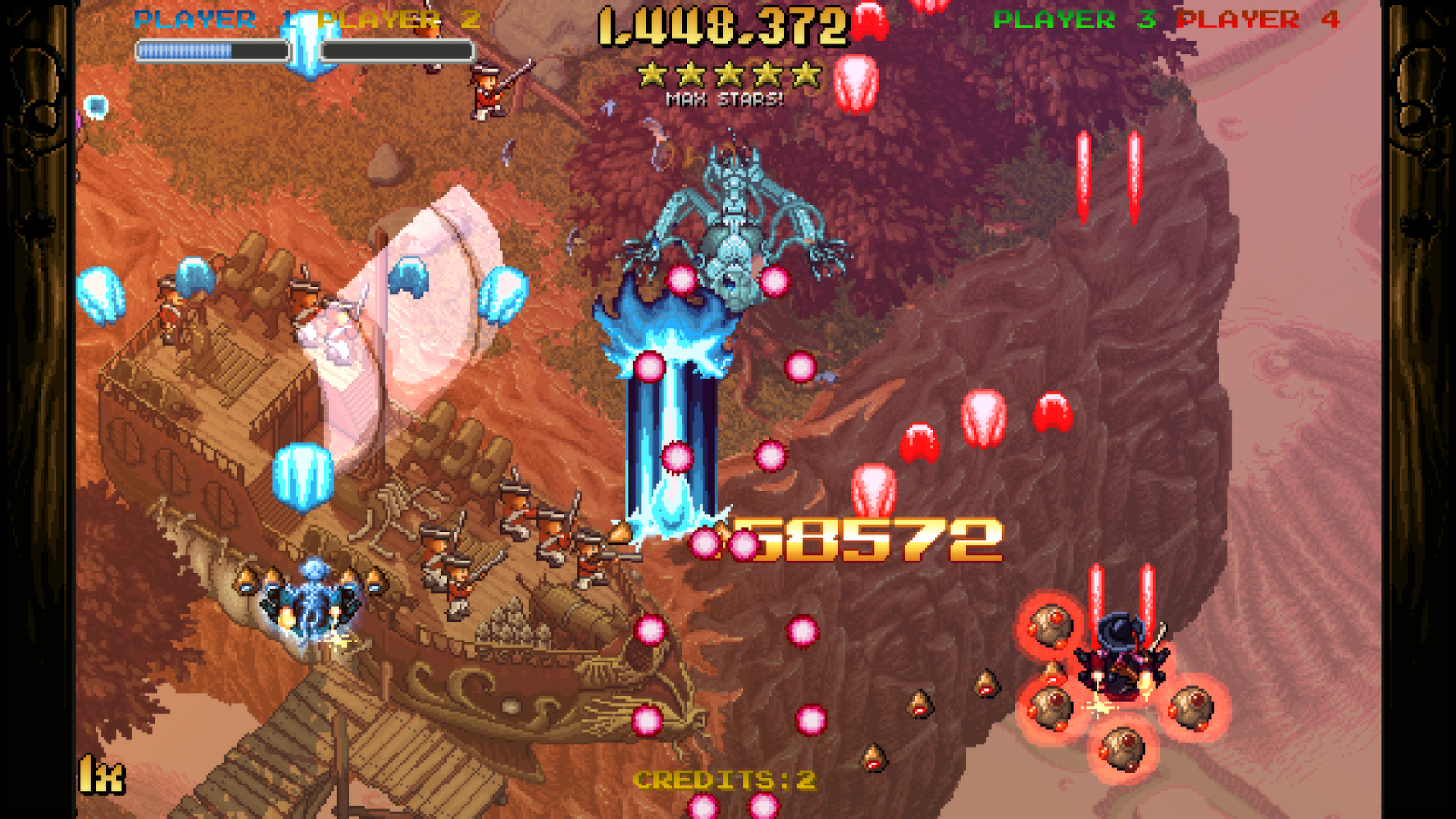 After all that, though, I have one major problem with the game: the progression.  There are five story stages, but you can only complete the first three on the normal difficulty selection.  To unlock the fourth, the first three must be beat on hard, and then those four must be beat on the next higher to unlock stage five.  It's honestly not that hard since your continues are per level so you should be able to power through it, but I don't like locking the rest of the game behind a difficulty selection.  The same system applies to the extra Moon levels, except even higher.  The last moon stage is actually very hard, with no way to do it on anything but the forth or fifth highest difficulty.

There is also a Gauntlet mode, that acts more like an arcade setting, where you have to complete all of the stages with limited continues (they are not per stage, but per play).  Again, you can only do so many stages based off the difficulty selected, making it harder and longer.  Wow, don't read that out of context.  Anyway, there are also challenges to complete, because... why not?  I'm not a fan of them, but they are easy enough to add for some more content.  I tried a few of the first ones, and, yes, they are pretty difficult!  Nothing makes me feel worse at shmups than challenge levels, even if I can nearly 1cc (credit clear) a game.

Jamestown+ does have local co-op, and it works well.  It's only slightly different from normal, since you no longer have lives.  Instead, if someone dies, they will respawn after some time if at least one person is left alive.  Otherwise, there is a power-up that spawns that can revive everyone.  The timing of the power-up is questionable, since it seemed to spawn for my wife and I near the beginning of stages, and when neither of us was dead.  If all players are dead at once, then you can use on of your continues to bring everyone back, subject to the limitations of the continue by game mode.  There's also a DLC pack that contains four new weapon sets.  The ghost weapon is my favorite of the DLC ones.  It's fun to use, but it's not going to replace my favorite.  The other three are ok, but I would only really use them once to try them out or get one of the added trophies.

I really like Jamestown+.  It is a very fun shmup/shooter/space shooter with an interesting Vaunt system.  There is also a good amount of different weapons to try.  I'm not a fan of locking the further stages behind higher difficulties, even if it wasn't too hard to get them all.  However, unlocking all the ships and challenges are difficult, but it gives you so more things to do after beating the main story.  It also has some fun co-op, if you have other shmup fans in your house.
Posted by The SAHD Gamer at 1:53:00 PM