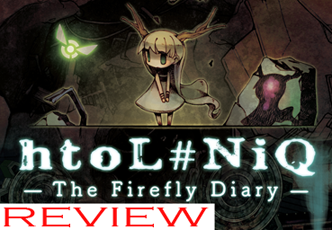 htoL#NiQ is a puzzle game where you must lead a little girl through deadly obstacles by using two different fireflies.  No, I'm not sure how to pronounce the title either, so it's easier to call it by its subtitle, The Firefly Diary.

As mentioned before, the game is primarily a puzzle game.  The front touch screen is used to directly control the first firefly.  Mion, the girl, will follow it to the best of her ability.  Placing it above or below a ladder will have her climb it in the appropriate direction.  She's really slow about getting to places, which can make it much harder to complete some puzzles.  Granted, she is a little girl, but she seems very intent on not caring about the danger she's in.  While there is the occasional scene where she somewhat hurries away from a scary monster, she mostly shuffles along while you wait for her to catch up and hopefully not die.

The back screen is a much cooler idea.  It controls a second firefly that lives in Mion's shadow.  This firefly can hit switches and even enemies, but to travel to its destinations, the shadows must be connected so it can reach.  The first firefly is a light source, so using both to compliment each other is necessary.  Using the back touchscreen is very imprecise, which is a drag.  The game needs some sore of precision, but it's just not possible when you can't see what you are touching.  At least the game slows down when using the shadow firefly, otherwise it would be near impossible to use it effectively.  There's also a cooldown period after exiting the back touchscreen, so it won't register you touching it for a few seconds afterwards.  Combining those two negatives makes using it a lot harder than it should, resulting in me dying a lot.  Well, not me, but poor little slow-walking Mion.

Each stage is not very long, but will take awhile to complete, simply because of the nature of the game.  It is very easy to fail.  If Mion is brushed by just about anything, she will die a horrible death.  There are a fair amount of checkpoints, but the game can get pretty hard.  Probably less so if you are a regular puzzle game player.  However, Mion's slow shuffle and fighting the touchscreen-only controls causes a big rift between knowing how to complete a puzzle, and actually being able to do it.  I personally find that to go against the point of a puzzle game, since figuring out what to do should be the hard part, not trying to get through it because of iffy controls.  With enough trial and error, it is possible to make your way through the game, though I suspect more than a few will give up partway through... and I can't blame them.

htoL#NiQ: The Firefly Diary isn't necessarily a bad game, as visually the game is very charming, but it could be much better.  I'm really not a fan of touchscreen only controls, and this game did nothing to change that.  Supposedly there is a patch that will add actual controls, but I'm not sure that will save it.  It won't fix the disconnect with getting her to move, since you don't directly control her.  I'm not a fan of puzzle games, so if you are, you might like the game.  After putting up with trying to get Mion to move anywhere with any kind of haste, I was fine with her meeting yet another grisly end while trying not to lose my sanity.
Posted by The SAHD Gamer at 4:24:00 PM