Branching out from the main series, Hyperdimension Neptunia: Producing Perfection takes the characters and places them in an idol simulator.  You take the role of their summoned producer to help them take back their shares from idol group MOB48.  In continuing with the traditions of the Neptunia series, this game doesn't take itself seriously at all.  In fact, they even tell you at the beginning that it isn't canon.  If only more games did that...

Anyway, to reclaim your lost shares (or take ones from other nations), you will have to train your chosen idol, raise their stats, and put on concerts.  Most of this is done by picking menu options to raise a stat, get more fans or rest so you don't stress out the CPU.  Stat raising activities have four different levels- bad, standard, good and excellent- that grant different amounts of stat and stress gains.  I haven't played any other idol simulator games, so I'm not sure how similar it is to those, but I understood the whole process pretty quickly.  You make one selection a day, so the game progresses swiftly.  The time limit to have the most shares is 180 days, but it's pretty easy to finish the game in much less time.  Especially if you max out a CPU's stress, which ends the game immediately.  The girls can even form groups, although you will share the shares.

Concerts are what you'll use to get the shares back from MOB48.  While there are tutorials, it still took me a few tries to get the hang of what to do.  The idol will sing and dance on their own, and it's your job to do the stage props and camera angles.  Whenever the audience cheers or chants, use whatever effects you have (up to three) to raise the audience meter.  Once I figured out to just use all of the ones that weren't on cooldown, my score vastly improved.  The camera is a lot trickier to work.  There are four different angles, and figuring out when to switch them is a lot of trial and error, mostly because it moves the meter so little that it's hard to tell if you did it right.  It seems to get boosts if you change the camera just before a new line of the song begins.  If you are solo with the idol's personal song, you can activate HDD.  You can get more points during your transformation, but the limitations make it not as useful, so I didn't use it very often.  There's only 5 songs, so it's easy to learn when to best use stage effects, camera angles and HDD forms. 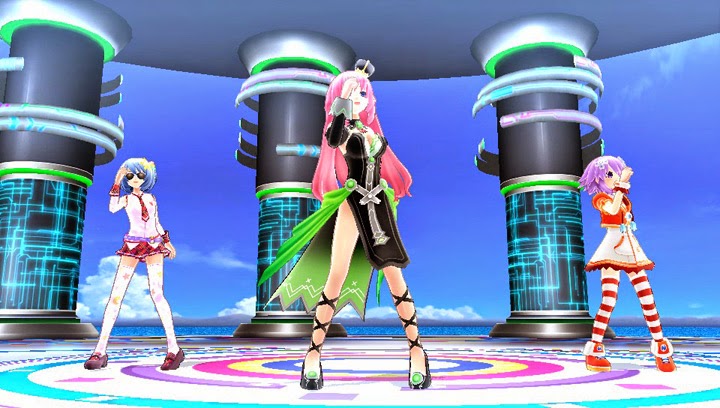 It might only take a few hours (around 5 for me the first time through each girl) to get through the game for the good ending, but there are 4 different girls and three endings for each.  Plus, there are many different scenes to see depending on stats, friendship and stress.  It all adds up to a good 30 or so hours of play, and even more if you are aiming for 100% completion and the trophies.  The "true endings" themselves require you to see several key scenes and answer them correctly.  Seriously, if you pick even one option wrong you won't get it.  Unless you are using a walkthrough, that's a lot more playtime if you're intent on getting all the endings.  The new game+ option is really nice, since you will keep your stats, making subsequent trips through the game even faster and easier.

The trophy list has a 3-way split with first/last types and endings.  Each girl has a trophy for each of their endings (12 total).  You'll get some for selecting the menu options the first time, and many for compeltion (all events, costumes, etc.)  It's easy to get a chunk of them just by playing through the game, although the true endings and all events will take the longest time.

If you are a fan of the series, you will get more out of Hyperdimension Neptunia: Producing Perfection.  While the game itself isn't canon, it still does its job of lampooning gaming (especially the awesome credits scenes!) and the characters themselves.  It's a fun little diversion of a game that is more relaxing than taxing.
Posted by The SAHD Gamer at 4:41:00 PM