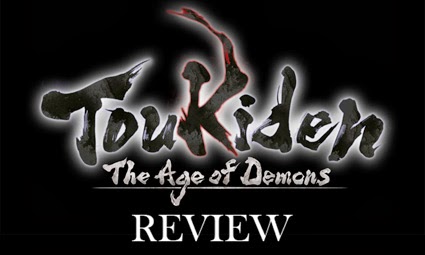 Toukiden: Age of Demons is an action game in a similar vein to Monster Hunter.  It tasks players with defeating large demons and protect a small village.  Players can do this with friends over the internet or with the computer controlled characters, and craft new weapons and armors with the rewards from each victory.

Character models, weapons and attacks are very reminiscent of Dynasty Warriors, which makes sense given who makes the game.  The stages are much more fantastical.  Like the Orochi games, the locations are realistic locations and either in ruins or twisted by their exposure to the Oni's miasma.  The spoken audio is Japanese only, but it's not a hindrance because there is rarely any dialogue in the middle of the fights, and what is there isn't that important.  The game does look and sound good on the Vita.

Each quest will have you go into an area infested with Oni and you must exterminate them.  Occasionally you will get a quest that has you kill some small fry, but most quests are to defeat one (or a few) large Oni.  If you've played a similar style of game where you hunt monsters (haha) you will feel right at home in Toukiden.  Using the "eye of truth", you can see the general health of the monster's different parts and the health of the monster overall.  Attacking an arm or a leg enough will sever that part from the big baddie and allow you to purify it.  Doing so will reward you with an item, and is worth doing.  Sadly, it doesn't much affect the large Oni, since it will get a phantom limb of sorts and can still use it.  However, breaking multiple pieces sometimes will affect their moves, such as the Windshredder falling over after his charge if all of his legs have been purified.  You have to do it quickly because if you just leave them around after being severed, the monster can regenerate them and restore its durability.  Really, this is my favorite part of the game.  I love systematically breaking or severing every part I possibly can in a fight, mostly for the extra loot you gain.  However, it's also fun and satisfying to smash a creature's leg off and watch it fall on its butt.

Each weapon type will have different strengths, weaknesses, and uses.  The dual knives allow you to attack quickly and from the air, making some of the higher monster parts easier to break.  The gauntlets are slow and strong, and can weaken an enemy's defences.  It's not too hard to transition to different weapons if you so choose, but it's best to try them all and use the one that suits your play style.  For me, it was the knives.  I had a lot of speed and mobility, and I could get into the air to break the hard to reach monster parts.

To further customize your play style, each weapon can equip 1-3 mitama.  The first one equipped will dictate which skills you can use in battle (each type has 4 that all mitama of that type will give you), such as healing an area, attacking with an energy geyser or even running faster.  Thankfully every type has a personal heal, and it's neat that the Spirit type can charge the heal to make it more effective, and the Healing type mitama will naturally restore more health per use.  Each mitama will gain experience in battle when you purify enemies, and can be leveled up to learn new passive abilities.  They can only have three at a time, and cannot re-learn any you have passed up or deleted unless you revert them to level 1 and start over again.  You do keep the list of what they learn at what level, so with some work you can make the perfect ones for your play style.  I wish that you didn't have to start them over to re-learn a skill you passed on, but there is at least a way to do it (even if it is time consuming or expensive).

There are seven total chapters of monsters to kill, and completing just the story alone (first five chapters) took me about 30 hours.  Doing all of the single player content would be around 50.  You will fight the monsters several times each, but that's the idea of the game.  Kill a monster enough that you can wear (or wield) it.  The multiplayer quests can be done solo, and those would add even more time to play.  This helped, since the few times I tried multiplayer, I wasn't able to find any lobbies (maybe I wasn't high enough in the online quests).  Any personal quests to complete the trophy list and obtain the platinum will take well over 100 hours.  There are a few trophies for completing quests and story chapters, but the longer ones will be for getting all of the mitama and obtaining all of one type of weapon.

I really like Toukiden.  It's enough like Monster Hunter that it fills that void in the Vita's library, or even ease people into that style of game without many of the drawback of that series.  On its own, the game has a lot of monster fighting content for just single player, and also a lot for multiplayer.  It might be a bit too much grinding for some.  It's satisfying to sever the monster's parts and purify them for loot.  If you have a Vita, I'd recommend at least trying the demo, since the progress of that carries over to the full version, and it's worth playing.
Posted by The SAHD Gamer at 10:09:00 PM